The printing house was opened in 2003 to commemorate two reputable monks from Vrbnik, the first known Glagolitic printer Blaž Baromić and the last Glagolitic printer Dragutin Parčić. It contains a replica of the printing presses with all the accompanying equipment used in the 16th century. It was built according to the precise designs of professor Fran Par of the Punat Shipyard. The seemingly rough and solid wood press is a very fine and precise instrument for printing texts, as well as illustrations made in linocut and woodprint, Glagolitic initials and artworks. The first printed books were real works of art decorated with illuminations and miniatures, and in the Croatian territory they were printed in the Latin and Glagolitic scripts. In Glagolitic printing a special place is occupied by the priest glagolitist Blaž Baromić (born after 1440, died after 1505) as the first famous Glagolitic printer who, after years of experience in Vrbnik's Glagolitic scriptorium and printing education in Venice, opened the Senj Glagolitic Printing House in 1494 and printed the fourth Croatian Glagolitic Incunabula, known as the Senj Glagolitic Missal. The last Glagolitic printer was another man from Vrbnik, Dragutin Parčić (1832-1902), an extremely versatile person: a Tertiary Franciscan, canon, glagolitist, grammar school professor, scientist, linguist, lexicographer, cartographer and one of the pioneers of photography in Croatia. As an excellent connoisseur of Croatian glagolitic tradition, he published the last Glagolitic Missal in 1893. 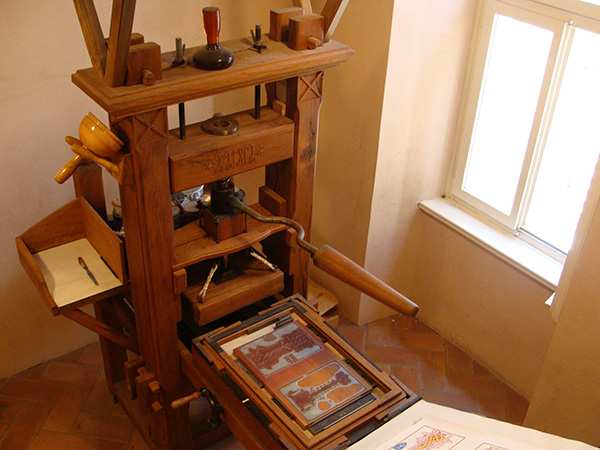